Top Cities To Invest in Indonesia Besides Jakarta and Bali

While Bali, Jakarta and its surrounding areas continue to lead many industries in terms of economic growth and strong project pipelines, the gravity of investments has seen a shift to different Indonesian regions across the entire archipelago and becoming more and more popular among international investors to invest in Indonesia.

Entrepreneurs have a wide array of areas to choose from, especially with more than 125 millions of the country’s population living outside of Jakarta and Bali. In fact, each city in Indonesia with its own charm and prospects could now be investors’ next gold mines to do businesses. 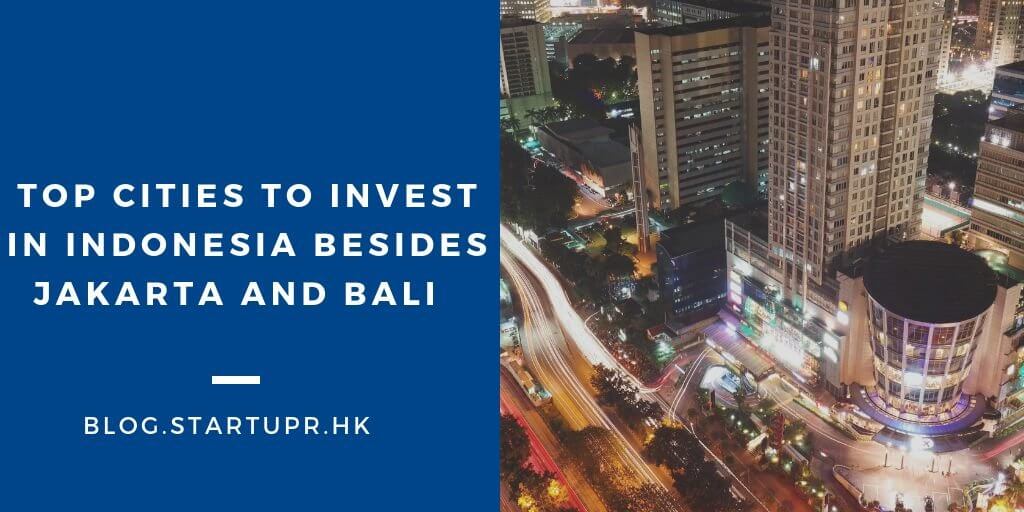 In this article, we will address 8 potential cities beside Jakarta and Bali that are becoming more and more popular among international investors to invest in Indonesia.

As the second largest and one of the most populous metropolitan cities in Indonesia, Surabaya has managed to attract many foreigners to do business here.

Thanks to its population of 3.2 million, Surabaya is a place rich in human resources. With its excellent supporting infrastructure and its role as a business gate to the eastern region, it is also one of the top five cities in Asia to invest in the property sector.

On top of that, lucrative sectors that investors can look into include manufacturing, trading, agriculture, construction and retail.

Noticeably, investing in this metropolitan has another advantage – Surabaya has relatively lower costs of living compared to other major cities such as Jakarta.

This is extremely beneficial to entrepreneurs and startups in terms of initial cost reduction for their new businesses and their sustainability thanks to lower wages of their employees.

Another great opportunity comes from Pekanbaru which encounters a massive growth of construction of buildings and increasing foreign investments. In fact, Pekanbaru achieved several awards with “Best Cities for Investment in Indonesia” being one of them.

As of the end of 2017, the Pekanbaru City Investment and Integrated One-Stop Service (DPM-PTSP) recorded a total value of investment entering Pekanbaru at IDR 4 trillion. This figure has outperformed the target set by the local government.

Several factors make Pekanbaru a great place for investments. Not only it is the 9th largest city in Indonesia with the highest capital and banking rotation, but the political and economic conditions in Pekanbaru are also considered stable.

With its outstanding infrastructure, good governance, high-income population, close proximity to countries such as Singapore and Malaysia, and dynamic markets, it is not hard to see the reason why Pekanbaru is the host of international giants in sectors such as oil and gas, rubber-processing, trading, services, tourism, etc.

Bandung is one of the favourite destinations for foreign investments and residency, especially with the Cipularang toll road opened 10 years ago making Jakarta-Bandung access easier.

The infrastructure has improved tremendously and developments such as city parks and public transportation make Bandung a “Teknopolis City” (a smart city) more attractive to investors.

Besides, as projects such as the Jakarta-Bandung High-Speed Railway grow, so does investment in manufacturing and resource extraction in Bandung – mining projects have increased, gas and oil operations are hiking, and trades and services are improving.

Investors should also consider investment in science and technology, telecommunication, housing and property, tourism and services.

As of June 2018, the economic growth in Batam has hit 4.5% contributed by investments, and the investment plan was valued at US$392 million. Up to 80% of the investments are mostly in the metal and electronic industries.

Batam has received more attention from its neighbouring countries such as Singapore and Japan resulting in PT Cipta Adil Industries, a company from Singapore, investing IDR 50 billion in Batam. In general, investors from Singapore intend to make Batam a digital economy region and the centre of the creative industry as its operating costs are substantially lower here. The added value of Batam is its proximity to tourist attractions, strategic location on the main sea road and governmental incentives that make the licensing process in Batam even more favourable to investors.

Driven by the service and industrial sectors, many investors are looking for opportunities to invest in Makassar, especially now when the local government implemented policies catering to foreign investments. These opportunities include huge projects in energy, transportation, fishery, trading, maritime, tourism and hospitality, healthcare, building and infrastructures.

As the centre of economic and educational development in Sulawesi, the property investment in Makassar has shown a positive trend in recent years.

The opportunities to build a profitable property business here are large with the rapid growth of tourism and food industry exceeding other areas in Indonesia, making the property prices continue to rise.

Trading is one of the strongest sectors in Medan with its main seaport contributing to 20% of the total export in containers in the entire country.

However, Medan has much more to offer to foreign investors with its booming industries such as food and beverages, manufacturing, retail, logistics and warehousing, mining, chemical, and telecommunication.

The increase in the number of investments proves that Borneo (Kalimantan) is one of the most potential places for Foreign Direct Investments (FDI) as Kalimantan ranked as one of the top 10 FDI provinces.

Its close proximity to Balikpapan (the petroleum city), and West Kutai Regency (the industrial area) has accelerated the growth of property, trading and retail sectors. This is mostly because big companies in its neighbourhood set their headquarters or home offices in Samarinda.

Samarinda has so much potential in diverse industries especially in mineral resources. The full development of mines and energy fields presents enormous opportunities for investors in the infrastructure, logistics and transportation.

As a result, the local authorities are driving a large number of projects in East Kalimantan, including the US$2.4 billion Trans-Kalimantan Railway, expressway and port upgrades, and other smaller coal-oriented railways.

These infrastructure developments are also driven by Indonesian government’s hopes to expand the role of manufacturing and agriculture and diversify the province’s economy.

Semarang is one of the most important cities equipped with adequate distribution channels and infrastructure for both domestic and international markets.

Being one of the main access points in Indonesia, the increase of Semarang’s industrial areas and the development of retail and trading sectors make Semarang even more alluring for investors.

Central Java Province is a fertile agricultural province, and Semarang is famous for its high-quality rice products. Therefore, this city is suitable for investments in the food industry.

With 2 million of its existing population, Semarang is also a breeding ground for many labour-intensive companies particularly in manufacturing such as textile, apparel, machinery, etc. Thanks to a number of foreign companies located in Semarang, the city is also suitable for property, tourism, hospitality and trade industries.

Overall, the diversity of the Indonesian archipelago makes it a perfect place for international investors in any business sector. Whatever your business plan is, you can be sure that at least one of the cities mentioned above will fit your needs and provide you with the required facilities.

At this moment, investors and entrepreneurs are preparing to set up their business overseas – especially in areas like Hong Kong. To set... Read more

Whether you have a home office for your business or an office address that doesn’t have people working there all the time, especially... Read more

Indonesia has become an attractive destination for foreign investors with its current political and economic stability, as well as the plethora of investments... Read more