The number of organizations approaches 1.4 million worldwide. And according to the World Bank’s Doing Business 2018 report, Hong Kong’s ranking in “starting a business” remained third internationally. This shows that Hong Kong is one of the major business centers in the world for companies.

In 2017, a total of 160,229 local companies were newly registered with the Hong Kong Company Registry, among which 51,002 were incorporated online at the e-Registry. In 2018 thus far, the total number of companies that were newly incorporated is 43,254.

Hong Kong means business, so take a look the economic and the trade information of Hong Kong, which will make you understand Hong Kong Business Formation Statistics Report 2018 more precisely. 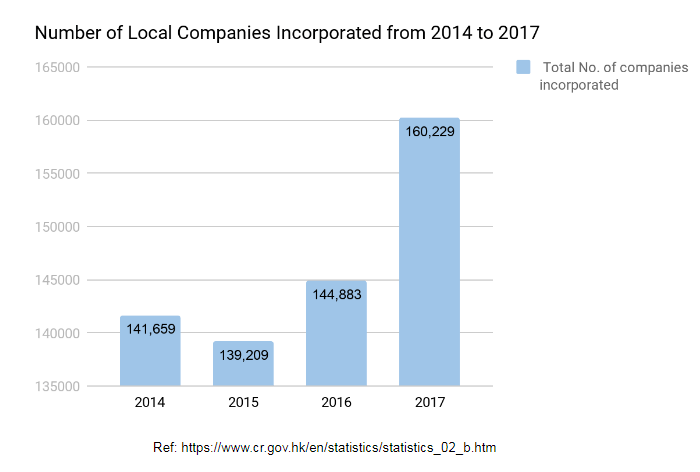 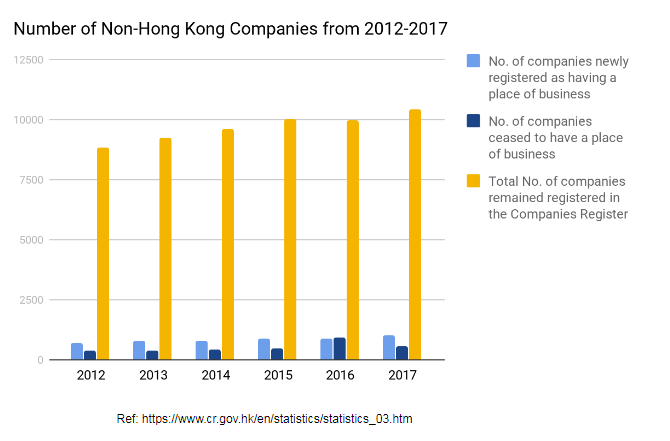 Here are some key statistics of the economics in Hong Kong over the past few years:

The above statistics shows that Hong Kong enjoys the honor of being the world’s freest economy, the world’s most service-oriented economy (the service sectors which are accounting for more than 90% GDP) and the world’s second-largest host and investor of foreign direct investment (FDI) stock, after that of The United States of America.

Let’s dig deep and uncover all those factors that are responsible for Hong Kong’s current economic situation:

1. The Budget and The Government Initiatives

The government of Hong Kong is playing a role as a “promoter” and a “facilitator.”The HK Government will proactively promote Hong Kong as an international legal and dispute free resolution service center and inspire the co-operation between the Bay area and the legal sectors of Hong Kong.

To expand Hong Kong as an international IT hub, there are plenty of measures taken to spur the development of IT and the creative industries. What’s more? The HK government has fixed a goal to double the R&D expenditure as a percent of GDP (Gross Domestic Product) from 0.73% to 1.5% to strengthen Hong Kong’s status as a “Global Financial Center.” The government seeks to promote the diversified development of the financial market.

The Government will take the lead in regulating the issuance of a green bond in the next financial year. Expansion of the channels for two-way flow of cross-border RMB funds will also be examined.

Mr. Paul Chan, the Financial Secretary, uncovered a number of measures to promote Hong Kong’s economic development in the 2018-19 Budget. The HK government will reserve an additional $50 billion for financing IT development, in which $20 billion will be utilized on the first phase of the Hong Kong- Shenzhen IT Park in the Lok Ma Chau Loop. Last but not least, the government will actively seek to sign the following with other economies, including those in the Belt and Road Initiative, to fortify Hong Kong’s position as an international trade and investment hub.

In addition to this, the government will provide additional funding of $250 million to HKTDC for assisting local enterprises in seizing possibilities arising from the Belt and Road Initiative and the Bay Area Development. This will encourage the development of e-commerce, and enhance Hong Kong’s role as a premier international convention, exhibition and sourcing center.

Below is the list of latest developments that occurred recently in the history of Hong Kong and which drastically changed its economy.

Now, looking ahead, the consumer price pressures are expected to increase somewhat. The government forecasts Hong Kong’s consumer price to grow by 2.2% in 2018.

According to a recent survey;

There are four main pillar economic sectors of Hong Kong, and these include the Tourism sector (4.7%), financial services sector (17.7%), the professional and other producer services (12.5%) sector, the trading and logistics sector (21.7% of GDP regarding value added in 2016).

Hong Kong also has clear advantages for the further development of almost six industries and which together accounted for 8.9% of GDP in terms of value added in 2016:

Financing by the continued momentum in global economic expansion and the strength in domestic demand, the government forecasts Hong Kong’s economy to grow by 3-4% in 2018.

A rise in HK economy indicates higher income or expenditure which simply means that there is a rise in the standard of living of the people and due to rising income there will be higher spending on various goods and services like healthcare, education, etc. 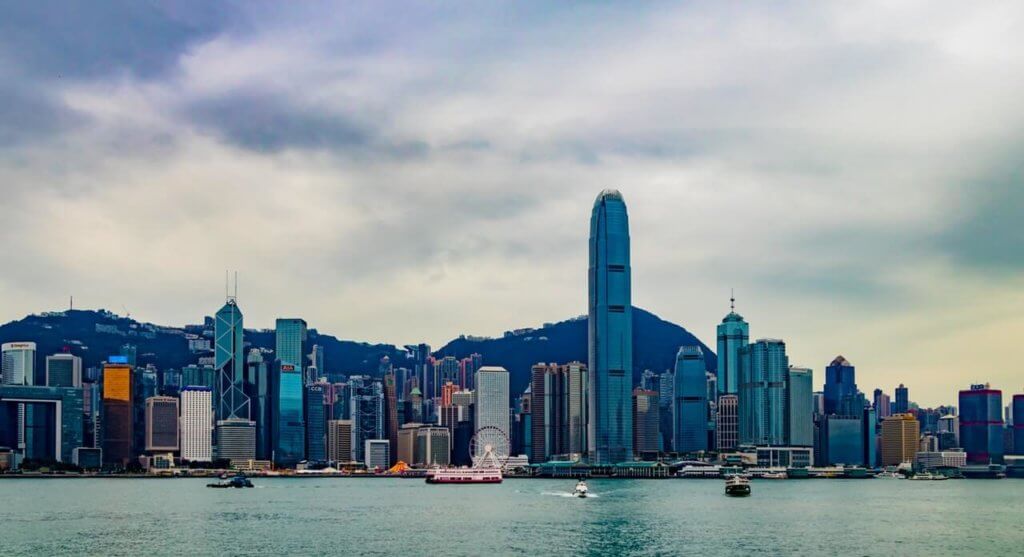 Hong Kong is a highly winning market for foreign direct investment. According to the World Investment Report of 2017, global FDI inflows to Hong Kong amounted to the US $108 billion in 2016, ranked fourth globally, behind only the Chinese Mainland in Asia in term of US $145 billion. Regarding outflows, Hong Kong is ranked third with the US $62 billion in Asia, after the Chinese region (US$183 billion) and Japan (US$145 billion).

As indicated by a recent study, Hong Kong’s aggregate load of direct internal investment was appraised at US$1,626 billion at the end of 2016. One unmistakable element of such direct venture was the indirect channeling of capitals from non-working organizations in low tax regions. By this background, the English Virgin Islands, Netherlands, Cayman Islands, and Bermuda represented 34.2%, 6.3%, 7.7% and 4.7%, individually, of the aggregate supply of internal direct business in 2016.

Excluding the low tax regions, the Chinese mainland was one of the most vital sources of direct investment in Hong Kong, accounting for more than 25.7% of the total. Other influential sources include the United States (2.5%), Singapore (2.3%) and The United Kingdom (2.2%).

Not only this, the majority of the stock investment was correlated to service industries that include;

Hong Kong has a superb infrastructure, which meets its population’s needs and contributes to the efficiency and growth of the economy. Hong Kong has an advanced land, sea, and air transport and communications system. The railway system is one of the most efficient systems of the world and is connected to Chinese railways via the Kowloon peninsula.

Hong Kong’s land transportation services are very efficient and to minimize the air pollution, the HK government encourages the use of public transportation. The Hong Kong-Zhuhai-Macao Bridge(HZMB) is a famous bridge of Hong Kong which consists of three major parts, including;

The HZMB plays a strategic value in enhancing the economic development of Hong Kong, the Western Pearl River Delta region (Western PRD) and Macao.
This will significantly reduce the cost and time for travelers. Moreover, the flow of goods between Hong Kong and the Western PRD will accelerate the economic integration of the PRD and its neighboring provinces and will increase its competitiveness.

More importantly, it will turn out to be a piece of the 16,000 KM national high-speed rail network which is now being developed at full steam; fostering closer financial ties between Hong Kong and the mainland. With the completion of this project, the traveling time from Hong Kong to Shanghai and Beijing will be shortened to about 8 and 10 hours respectively.

Besides the cross-boundary endeavors, the government has undertaken other large-scale infrastructure projects to advance the local transportation system and better long-term development for arts and culture. The government is also aiming to provide quality living space to citizens.

Besides this, a cruise terminal has been developed at the former Kai Tak Runway, with two alongside berths, well equipped with supporting which facilities to accommodate the simultaneous berthing of two mega cruise vessels (with a gross tonnage of up to 220,000). The construction of the Three-runway System has started in 2016 for completion in 2024 at the Hong Kong International Airport, with the commissioning of the new runway expected in 2022.

In addition to this, the government has published findings of the Study on the Strategic Development Plan for Hong Kong Port 2030 and the Preliminary Feasibility Study for Container Terminal 10 at Southwest Tsing Yi.

The findings reveal that Hong Kong will continue to see growth in the coming years.

These were the factors that have led Hong Kong as one of the most open economies in the world. Hong Kong is also the ideal location for business set-up and company formation. Hong Kong is primarily geared to enable a free enterprise to prosper with a minimum of restriction and bureaucracy.

Hong Kong offers a simple and low tax rate regime with free market principles. There are no restrictions on outbound or inbound investment, and also there are no nationality restrictions on ownership. Foreigners can invest in almost any business industry and own up to 100% of the equity.

The Hong Kong tax system is territorial. Profits from a Hong Kong business are directed to profits tax at a rate of 16.5%, but foreign-source income is not taxable even if paid to Hong Kong. There is no capital profits tax, no sales tax, no withholding tax on shares or interest and no legacy tax.

Hong Kong serves as a national headquarters and business hub for the Asia Pacific region for being a major financial and commercial center in its own right. Moreover, it acts as a gateway for companies looking to do business in Mainland enterprises and Mainland China seeking access to global markets.

Why is Hong Kong Still a Preferred Destination for Entrepreneurs?

For many entrepreneurs in the Asia-Pacific area, Hong Kong is a competitive platform. Hong Kong attracts many international company registrations and investments due... Read more

7 Tips to Start Your Hong Kong Business with Low Capital

Hong Kong is a city that attracts entrepreneurs from all over the world. It is a business-friendly place that welcomes expats. Today, it... Read more

In the international financial center of Hong Kong, there is an array of bank options available for companies as both Hong Kong bank... Read more